Surf and Sun
Around Sydney's beaches
It has been suggested to me that Sydney, in the summer season, is the backpackers destination of choice because of the three S’s.  Surf, Sun and I will leave the third one up to you to imagine.  And when we are talking about Surf and Sun, surely Bondi Beach is the first Sydney destination that springs to mind?  "Bondi" or "Boondi" is an Aboriginal word meaning water breaking over rocks or noise of water breaking over rocks.When you decide to go to the beach, please remember that until very recently, Australia had the reputation of being the worst country for Melanoma’s skin cancer.

​Our cousins across the pond in New Zealand don’t like us Aussies being better than them so now they hold the number 1 spot so remember to ‘Slip; Slap and Slop’  (Cover up, put on a hat, and use sun tan cream) 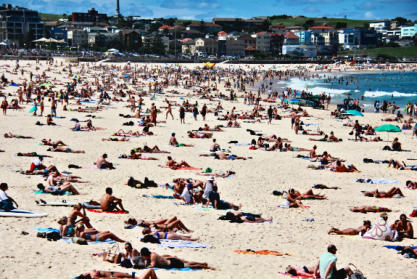 ​Stand at the top of the hill and you will be struck by the sweeping white-sand crescent that is Bondi Beach, one of Australia’s most iconic beaches. Good waves attracts the board surfers and for others, there is plenty to eat and drink on the foreshore or around Hall Street.  If an early morning jog is your thing, you will find many others working up a sweat along the promenade or, if you are fit, try the runs that starts in Bondi and travels along the coast, taking in Tamarama Beach, Bronte Beach and ending at Clovelly Beach, a distance of just under 8km.  I will take the bus, thank you. The Bondi to Coogee coastal walk is one of Sydney’s most scenic attractions. Begin at the Bondi Icebergs ocean pool and traverse the six kilometer clifftop trail between Tamarama, Bronte, Clovelly and Coogee beaches. The walk will take just over an one hour each way.  For more info go to ​https://www.walkjogrun.net

While on the beach, PLEASE only swim between the flags where the surf lifesavers can see you.  Remember the name ‘Black Sunday’ when 300 bathers had to be rescued when they were washed out by a freak wave.  Although 80 years ago, it can happen at any time.  Bondi is proud of their life saving tradition, and is officially recognised by Surf Life Saving Australia as the first surf lifesaving club in Australia.  It is also the oldest active surf lifesaving club in the world.  That is a proud heritage!While stripped down to your bikini, cossie or board shorts, give a thought to those people living just over 100 years ago.  Daylight bathing was first proscribed in 1833 in the Sydney Police Act, which banned it around Sydney Cove.  So if you wanted to take a dip, you could only do so after dark.  In early 1902 Sydney was in the grip of a drought and Randwick Council believed that allowing people to bathe in the surf would conserve water. Accordingly, Randwick Council allowed daylight bathing to take place at Clovelly.  In early October 1902 Randwick Council extended daylight bathing to all its beaches when it passed a by-law stating: "It shall be lawful for all persons, whether male or female, to bathe in the sea at all times and at all hours of the day ... within the municipality of Randwick."But Bondi, although so very well known, often features well down the list of best beaches in Sydney.   Coogee and Manly beaches often top Bondi 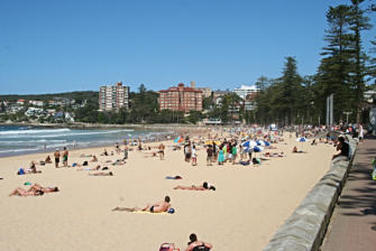 Manly Beach on the other side of the harbour can be reached by a 30 minute ferry ride across the harbour, and then a short stroll through the Corso to the beach.   The Corso, from the Italian meaning ‘social promenade’ is just that, a pedestrian mall joining the ferry terminal with the beach. There's a sign at Manly Wharf that reads: "Five miles from the city, a million miles from care." Governor Arthur Phillip, who discovered Manly in 1788, saw the local Indigenous people as he entered the harbour and described them as strong and manly.  The town of Manly was designed after the city of Brighton in England. The streets mimic the lanes of Brighton, which lead from the city centre to the sea. 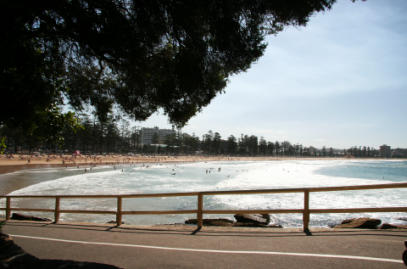 View looking back over Manly Beach
There is a very pleasant walk which begins at the Manly Surf Club at the south end of Manly Beach.  The Cabbage Tree Bay Eco-Sculpture Walk hugs the coastline all the way to Shelly Beach.  This flat walk is suitable for people of all ages and disabilities. The accompanying plaques have been designed with Braille notation for people with vision impairments.  The walk will also take you past the historic Fairy Bower baths, built by the locals in 1929.There is no shortage of coffee shops and restaurants along the beach fron or in the Corso.  The most difficult task is deciding which one to go to 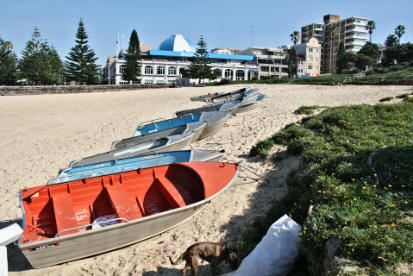 Coogee Beach
Coogee Beach
​
Coogee Beach was once the home of an English style pier and entertainment venue, built in 1928 and destroyed by the waves a six years later.  A Pleasure gardens, baths and aquarium were constructed at the northern end of Coogee Beach.  The aquarium was the scene of a still unsolved murder when an arm was found in the shark tank.  A conservation order was placed on the building in 1982 and in 1984 the building's huge dome collapsed.  It has subsequently been renovated.This is a great beach with calm surf and is family-friendly because of  a rocky island called Wedding Cake Island which shelters the beach and makes it a calmer option than some of the nearby beaches.  The promenade area has restored historic buildings and nurtured parklands. Most of the facilities are located at mid-beach with showers, change rooms and toilets near the Arden Street bus stop. The name Coogee is taken from a local Aboriginal word koojah which means "smelly place" owing to the amount of seaweed that can collect on the beach. But daily beach cleaning by Randwick City Council staff keeps the beach in pristine condition year-round.  This surely should have set off the alarm bells for the builders of the old pier. 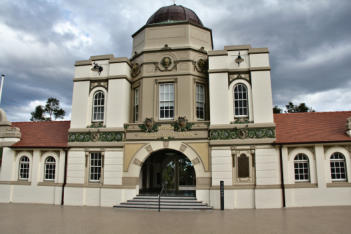 ​So now that you have taken a ferry ride to Manly, what about a second ride to Taronga Zoo and watch the seals having a swim.  Taronga Zoo must be one of the most picturesque zoos in the world, set on Sydney Harbour and with a view across the harbour and with the city as a backdrop.  The ferry stop is at the back entrance to the zoo and there is a aerial cableway that takes you up to the top.  Have your camera ready! 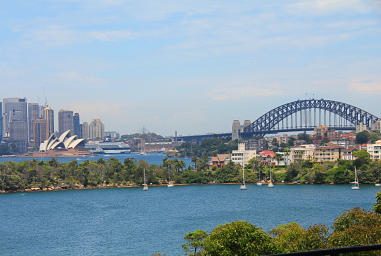 View from Taronga
The first public zoo opened in Sydney in 1884 on a Moore Park.  In 1912 the NSW Government granted 43 acres of land north of the harbour which were part of Ashton Park. Another 9 acres were granted in April 1916 and the zoo was opened later in that year.  In all, 228 mammals, 552 birds and 64 reptiles were moved from Moore Park to Taronga. Many, including the elephants, crossed the harbour on board a flat top barge.Today, Taronga cares for 4,000 animals from over 350 species, many of which are threatened.  While there you can watch a seal or bird show, listen to the keepers talking about the animals, pat a pet or swing from the trees like Tarzan, at Wild Ropes.
Proudly powered by Weebly