The Statues of Sydney  -  Centennial Park
Centennial Park has a distinctive and special place in Australian history and culture. It was once a huge catchment of creeks, swamps, springs, sand dunes and ponds fed by ground water, and was traditionally home to the Gadi people.

In 1811, Governor Lachlan Macquarie designated the area as the second Sydney Common and it was used for grazing, lime burning and timber clearing.

In 1825, convict labour was used to build a 3.5 km underground aqueduct, known as Busbys Bore, from the swamps to Hyde Park. This bore supplied Sydney’s main water supply from 1837 to 1859.In 1888, Sir Henry Parkes dedicated Centennial Park as a public open space for the enjoyment of the people of NSW. Hundreds of unemployed men were enlisted to turn swamps, scrub and rock into a grand park in the Victorian tradition with formal gardens, ponds, statues and wide avenues for Sydneysiders to drive their carriages around to ‘take the air’.

​On 1 January 1901, Centennial Park became the focus of the nation as the site of the inauguration of Australian Federation (this event is commemorated today by the Federation Pavilion).

​A rare statue - one of three such statues in the world - of the English novelist and social commentator, Charles Dickens.

Dickens was a renowned English-born novelist and social commentator. He achieved popular acclaim in the late 1830s, and his fame steadily grew until his untimely death in 1870. Dickens never travelled to Australia although some of the most notable characters in his literary works were said to be inspired by Colonial identities. Two of Dickens’s sons, Alfred and Edward, immigrated to NSW in the 1860s, where they were active in the political and cultural life.

The marble statue of Charles Dickens appears to have been one of eleven statues acquired in c1889 as decoration for the newly laid-out park. The statue was placed in Centennial Park in c1891. It was originally sited at the junction of Parkes and Hamilton Drives but was relocated to the junction of Dickens Drive and Loch Avenue in 1897, to make way for a statue of Henry Parkes.

The statue is one of only two known life-size representations of Charles Dickens in the world; the other is a bronze statue in Clark Park, Philadelphia USA, executed by American sculptor Francis Elwell in c1891. The rarity of statuary representing Dickens is due to injunction in his will requesting that no public memorials be erected in his honour. 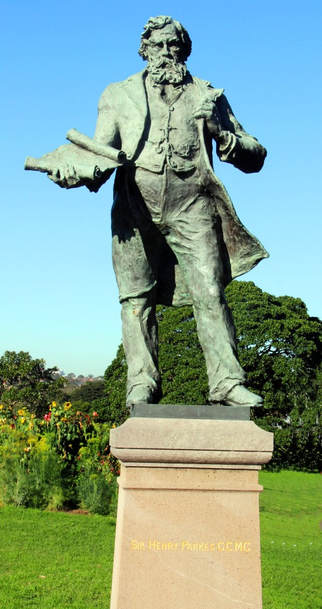 Sir Henry Parkes  served as Premier of NSW for five separate occasions from 1872 to 1891. Later in his career, he joined the Free Trade Party;  there were no political parties in New South Wales until 1887. He was the primary instigator of a conference in 1890 and a Constitutional convention in 1891, the first of a series of meetings that led to the federation of Australia. He died in 1896, five years before this process was completed.

The statue of Sir Henry Parkes was a memorial sculpture placed in the park in 1897.

It remained in Centennial Park until 1970, when it removed for storage following damage by vandals. The 1971 vandalism in fact led to a major assessment of the sculptures in the Park, and ultimately the removal for safe-keeping of any sculptures that were likely to be subject to similar attacks of vandalism.

A bronze sculpture by the sculptor Alan Somerville replaced the previous Sir Henry Parkes figure. It is located on the original sandstone pedestal.

The sculpture was unveiled by then NSW Premier, the Hon Bob Carr, on 27 April 1996 to commemorate the hundredth anniversary of the death of Sir Henry Parkes. A bronze commemorative plaque is located alongside the sculpture 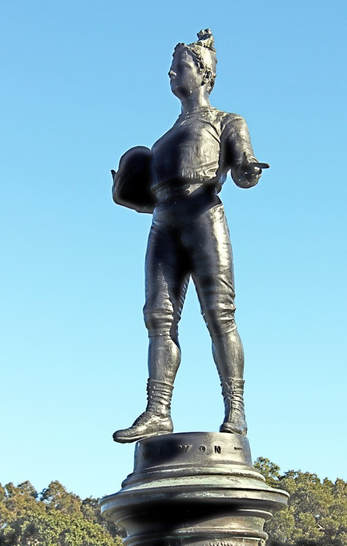 Also known as “The Footballer,”  was sculptured by the sculptor Tommaso Sani who was well-known in Sydney in the 1880s.

The life-sized figure, dressed in a woollen cap, sweater and tight knee-length trousers worn by football players of the day contrasts with the serene and idealised Neoclassical face of Apollo.

​The bronze pedestal shows eight scenes of a match in progress, played, not as might be expected by muscular men, but by hordes of tiny putti.

To drive home the satirical point further, the scenes of the match are separated by four large female cherubs, each adding in various ways to the mock dignity of the occasion. The first is enthusiastically trumpeting the beginning of the match, the second recording the score, the next inviting attention of the spectator and the last standing victoriously with the lion-skin of Hercules cast around her head and shoulders.

Sani was controversial in Sydney in the 1880s due to his work on the embellishment of public buildings. His most prominent work was the Pitt Street façade of the GPO building on which his carvings depicting working class figures -not the usual choice of subject matter for important buildings - met with opposition.

Only three of the original statues remain -– these two and ‘We Won’.

​Manufactured by the famous Luxembourg pottery company, Villeroy and Boch in 1888, ‘Sunrise’ is a standing female figure with a baby boy on a half orb, while ‘Sunset’ is a life size female figure draped in a cloak from the back of the head to the feet. 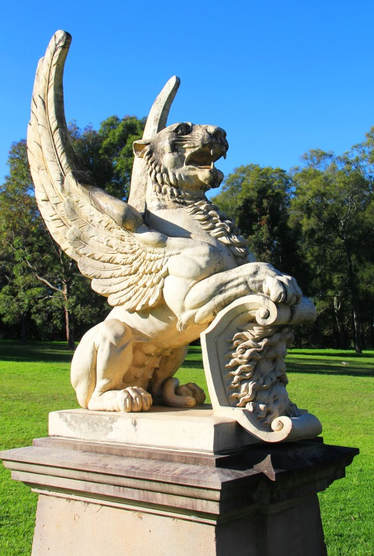 Two griffin sculptures were originally installed on Parkes Drive in the 1890s. The griffins guarded each side of the main entry road leading down from Paddington Gates.Originally manufactured by Villeroy and Boch and made of ceramic. They sat on the same on sandstone plinths they sit on today.

​In 1946 the griffins were in poor condition. In 2005 they were restored and reinstated to the Park.These statues are not true griffins, but are a hybrid known as ‘gryphonic’. True griffins have the face, beak, talons and wings of an eagle and the body of a lion
​​
Click on the Aussie icon below to return to the Australasia page,
​or click HERE to return to the home page