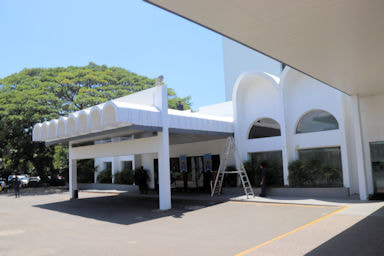 Gateway Hotel Negomabo   4 * * * *
Good location to catch a plane:- This is a good location to spend a night before catching a plane or after a late arrival. We spent two night there which was a mistake and should have opted for a hotel in Negomabo, near the beach and restaurants. The room was very comfortable and the dining room quite adequate for a one night layover. 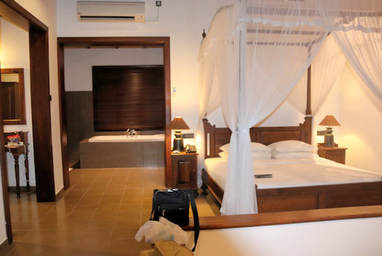 The pathways are elevated so our bedroom looked out into the tree tops. The grounds are massive and the hotel has attempted to create an old and historical feel.

Arriving after dark on the first evening we were escorted to the dining room, and back to our bungalow after dinner. Without the escort we could still be wandering. Better signage would be helpful.

The restaurant is vegetarian and very simple. No gastronomic delights but enough to keep body and soul together. ​
Jetwing Lake,  Sigirya   4 * * * *
Fabulous room, great staff, but ordinary restaurant:- Our hotel room was large and comfortable. The bathroom was bigger than some hotel bedrooms. The staff were always smiling and most understood English.

I can not say the same for the restaurant which was buffet style. Fish that was dry and over cooked. Chops that were dry. Most items were in limited supply although the range of food was great. Pity I am not a big curry eater. Having said all that, the deserts were great. 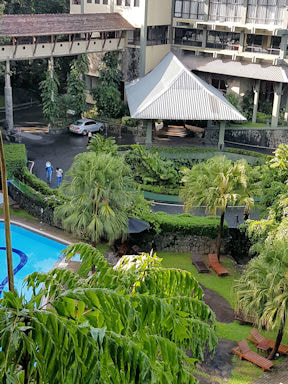 Entrance to Main Building
Earl’s Regency,  Kandy    5 * * * * *
Good all round:-  By the time we reached Kandy we were getting used to good hotels with comfortable rooms.  Earl's Regency continued down this path and raised the bar even higher.  The room was spacious, opening on to a balcony that looked out over the pool.  Most of the  bedrooms are in an adjoining building so you are isolated from any function noise in the main building.

The dining room should be used as a training venue for all other hotels. Quality food. Eastern and Western. Constantly being refilled.  A pleasure coupled with very pleasant staff.
It was wedding season and we were fortunate enough to witness the arrival of the bridal party, greeted in the traditional way by performers in costume.  A very enjoyable bonus.
Mandarina,  Colombo    3 * * *
​
The staff were fabulous but that is where it stops.  The bedroom was small, especially when compared with the rooms in our other hotels in Sri Lanka but I would make allowances because it is a capital city.  But it is not Rome, Paris nor Hong Kong.

Dining was great if you have an ‘eastern’ palate but very ordinary for a western palate and there is nowhere else to dine within easy walking distance.

The hotel is ‘dry’ in that they do not serve Alcoholic beverages.  OK if this is your choice but, after a hot day touring, I enjoy sipping a cold beer.

Across the road is a new development taking place.  60 story’s.  They were pouring concrete on our first night there and the noise went on, right throughout the night.
​
BACK
Proudly powered by Weebly