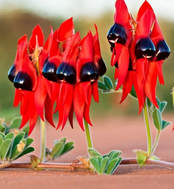 "Alice Springs?" "Why would you want to go there?" was the question.

Some people are born ignorant, others strive to achieve that distinction, but you can not say that to a friend who otherwise seems quite normal.

I am going back to Alice and Uluru because I was last there over 20 years ago and the pleasurable memories are as crystal clear now, as they were back then.  Things have changed.  Back then, everyone climbed the rock, except me because of heavy rain in the middle of a desert.  Rain in a desert, and all the Sturt's Desert Pea plants (Swainsona formosa) were out in full bloom with their long red blooms, prancing like attractive ladies in a Miss Universe contest. 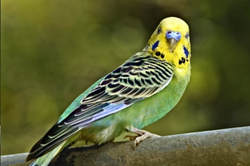 Growing up in Africa, we always had a few Budgies in a cage.  Imagine standing in Simpsons Gap in the West MacDonnall Range and having wild budgies fly past. ​ 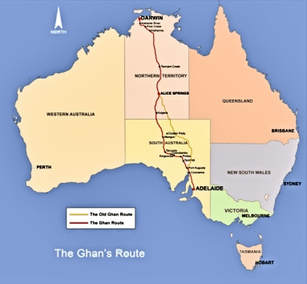 Alice Springs began life as a water hole, named by Government Surveyor WW Mills in March 1871 and named after Alice Todd, wife of the Superintendent of Telegraphs, Sir Charles Todd.  The Adelaide to Darwin telegraph station was built adjacent to the waterhole.
The Telegraph Station was named Stuart but the dual naming created such confusion for administrators in Adelaide that on 31 August 1933 the township of Stuart was officially gazetted Alice Springs.

Alice Springs was the terminus of the rail line from Adelaide. Originally known as the Afghan Express, The Ghan takes its name from the 19th century Afghan camel drivers who arrived in Australia and helped to explore the country's remote interior. It wasn't until 2004 that the line was finally extended northwards to Darwin. It has also been suggested that the name was given to the railway because of the notorious unreliability of this fortnightly steam train.  European pastoralist's commonly called it "in ribald fashion The Afghan Express." 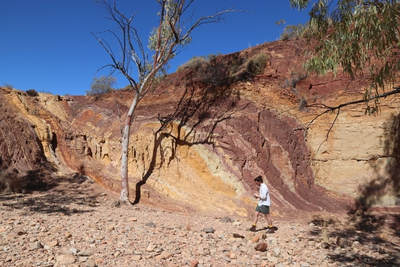 The Ochre Pits are a popular tourist stop on a tour of the West MacDonnell ranges
​
The Arrernte people who lived in this area, mined the ochre. It was ground and mixed with Emu fat for ceremonial body adornment and art.  The ochre also played an important role in the area’s economy, being traded with neighbouring tribes

It was considered some of the choicest ochre - soft to touch, vivid, with a slight sheen to it. The colours range from gold to crimson.  The Yellow (The dominant colour) is caused by a mixture of white clay and iron oxide (rust).  The red-brown colour is caused by high levels of oxidised iron in a very fine-grain haematite or limonite. White ochre has little or no iron. Tiny fragments of mica or quartz give the ochre a shiny quality. 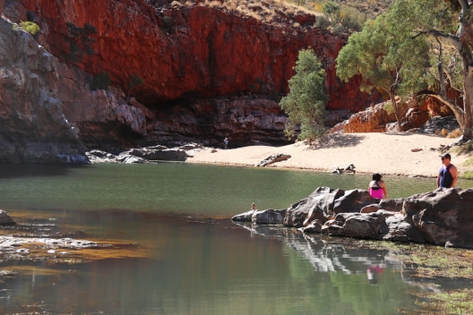 Ormiston Water Hole and Gorge Is located 135km west of Alice Springs and is accessible by sealed roads.

The gorge has a waterhole that is there year round and is great for swimming, especially in warmer months.  The swimming hole is a short distance from the visitor centre.  It is estimated to be up to 14m deep at its southern end.
​
The five minute Waterhole Walk, which has wheelchair access to the end of the paved path, and the 20 minute one way Ghost Gum Lookout Walk are the most popular with visitors.

​The area has an interesting range of native plants and animals including a number of relict plant species from Central Australia's tropical past. 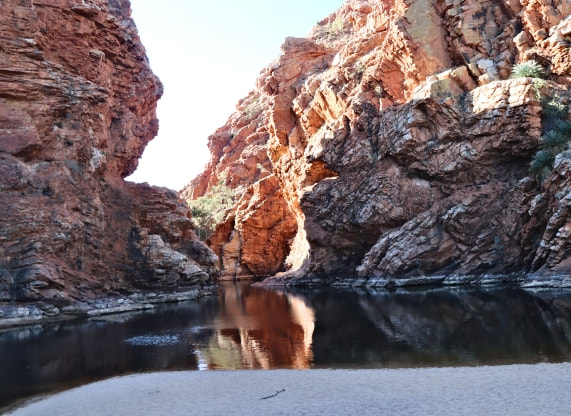 Ellery Creek Big Hole is one of the most popular and picturesque camping, walking, swimming and picnic spots in the Tjoritja / West MacDonnell National Park.  The Aboriginal name for Ellery Big Hole is Udepata. The permanent water made it a special meeting place for the Aranda people.
​
The spectacular waterhole is surrounded by high red cliffs and sandy Ellery Creek. Thousands of years of massive floods have carved out this waterhole, which is recognised as an internationally significant geological site. 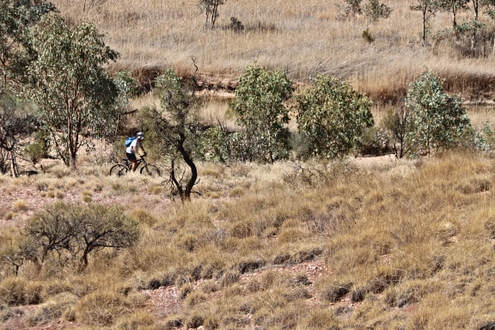 Finke River has long been cited as "the oldest river in the world", particularly by tour operators, and in popular books and brochures. The River was named by John McDouall Stuart in 1860 after  William Finke, who was one of the promoters of his expedition.   The indigenous name for the river in parts of the Northern Territory is Larapinta​.
​
Because meanders only form on flat plains, the river must have formed before the ranges were pushed up; this happened in a mountain building event referred to as the Alice Springs Orogeny which peaked between 400 and 300 million years ago.
{An orogeny is an event that leads to a large structural deformation of the Earth's lithosphere due to the interaction between plate tectonics.) 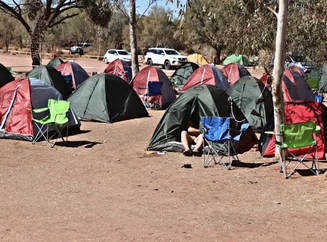 Despite being hot, cyclists and athletes still take pleasure in cycling, or running through the area.  There is even a four day run - The Run Larapinta that is a 4 day, 4 stage trail running race along the most spectacular sections of the iconic Larapinta Trail in Australia's Northern Territory.  Because of the race, the population of the village of Glen Helen doubled, and the quadrupled as can be seen from the temporary tent metropolis.
​ 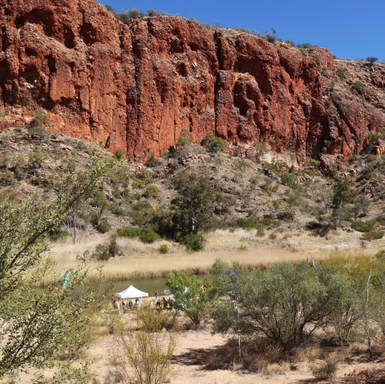 Glen Helen is truly beautiful waterhole edged by red quartzite cliffs. Although the name originally referred only to the glen through which the Finke River flows today it has come to mean the Glen Helen Resort, the gorge and the surrounding 368 ha Nature Park.

The finish post of the run can be seen in the lower right corner of this photograph. next to the river.
​The School of the Air in Alice Springs covers an area of about 1.3 million square km.  That is over twice the size of France.  Visit the visitors centre and you can watch teachers actually talking to their students in this vast classroom - the first school of the air to use two-way radio broadcasts to help with the education of students in remote areas who were unable to attend face-to-face lessons.  This is very well worth a visit
The Royal Flying Doctor is another 'must visit' visitors centre in Alice Springs. It first became operational in May, 1928. The first flying doctor of the service was Dr K St Vincent Welch and the first flying doctor pilot, Arthur Affleck of Qantas. Qantas, then known as Queensland and Northern Territory Aerial Service (Q.A.N.T.A.S)

In the early 1970s, the Tourist Facility was built and opened in order to tell the history of John Flynn, the RFDS and the experience of the early outback pioneers to visitors. ​
​Hermannsburg is an Aboriginal community 125 km km west southwest of Alice Springs.  Local Aboriginal people call it Ntaria.  It was established in 1877 at a sacred site known as Ntaria which was associated with the Aranda ratapa dreaming.  It was conceived as an Aboriginal mission by two Lutheran missionaries of the Hermannsburg Mission from Germany, who had travelled overland from Bethany in the Barossa Valley in South Australia. They named their new mission among the Aranda people after Hermannsburg in Germany where they had trained.

They missionaries arrived with 37 horses, 20 cattle and nearly 2000 sheep as well as dogs and chickens.  Initially they had little contact with Aboriginal people in the first few months, although their activities were being observed. After a group of  Arrentre men visited the mission camping near the settlement visited and they realised that communication was difficult, the missionaries quickly learnt the local Arrernte language. 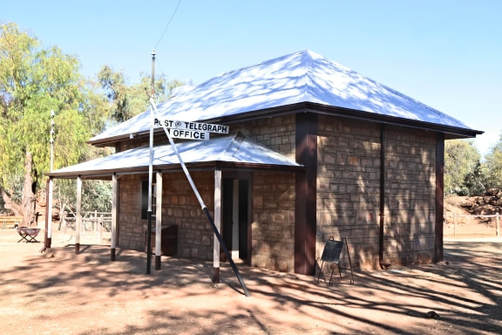 The Telegraph Station is 4 km north of Alice Springs.  It is a historic museum precinct with indoor and outdoor displays, presenting the story of the connection of Australia to the rest of the world through Telegraph Communication in 1871.

Since being declared protected as a Historical Reserve in 1963, the Alice Springs Telegraph Station has become the best restored in Australia with a commitment to authenticity, and the restored stone buildings house furnishings and artefacts from early last century.

​It was established to relay messages between Darwin and Adelaide and also linking with an underwater cable network to London, thus creating the first real communication between Australia and England.

​Well worth visiting when there is a guided tour.
Alice Springs Desert Park opened in 1997 and contains native animals and plants representative of central Australian desert environments, and contributes to their conservation through research programs as well as through public education.

The Desert Park is 7km from the heart of Alice Springs, west along Larapinta Drive.
It offers people the opportunity to experience the variety of the deserts of central Australia, exploring the inter-relationships between the plants, animals and people.

​The park offers a full range of educational presentations and animal shows. 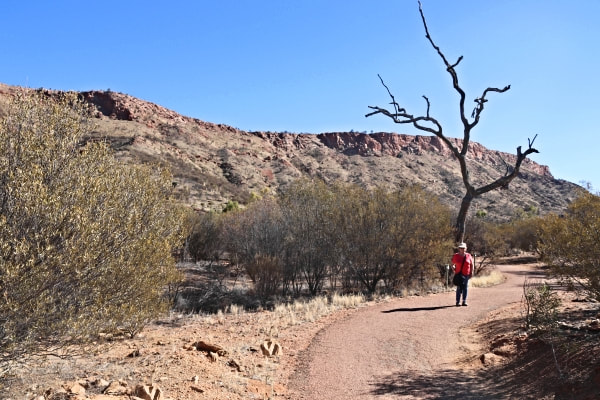 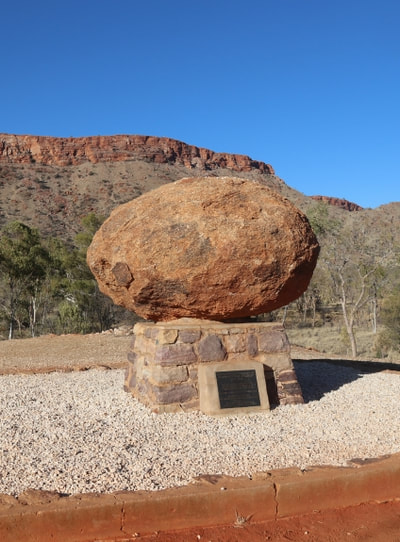 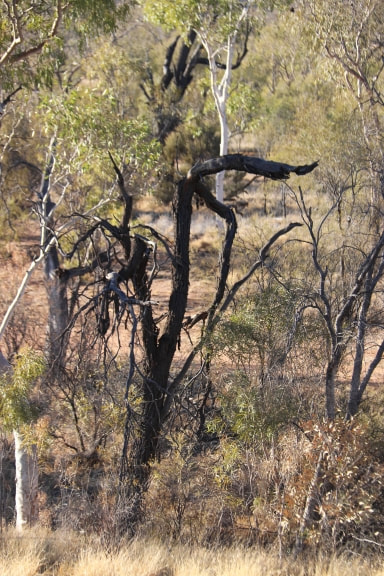 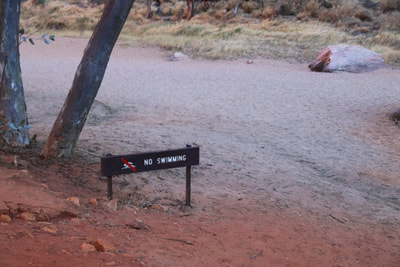 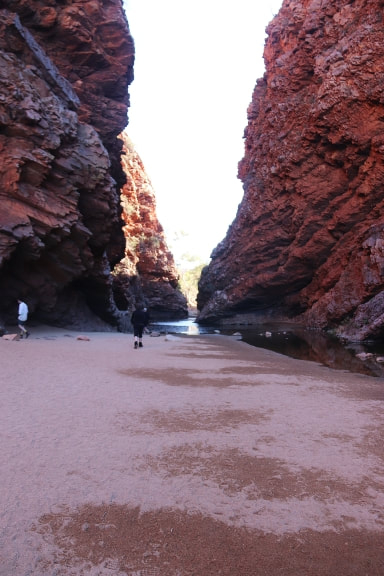 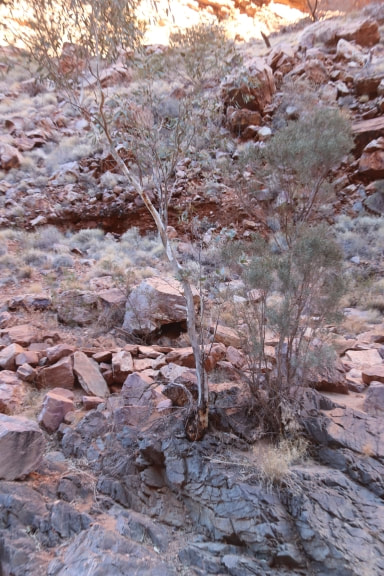 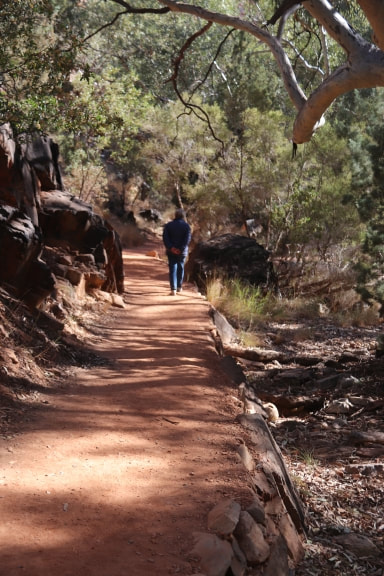 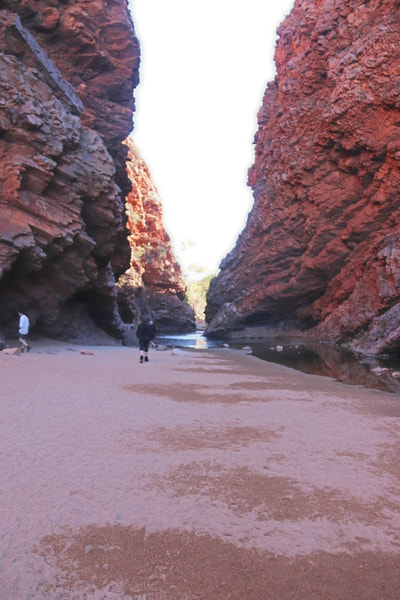 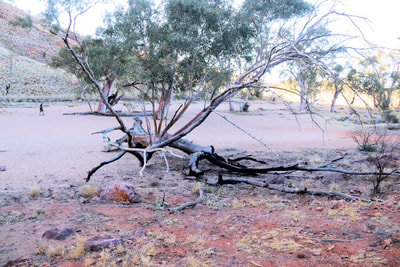 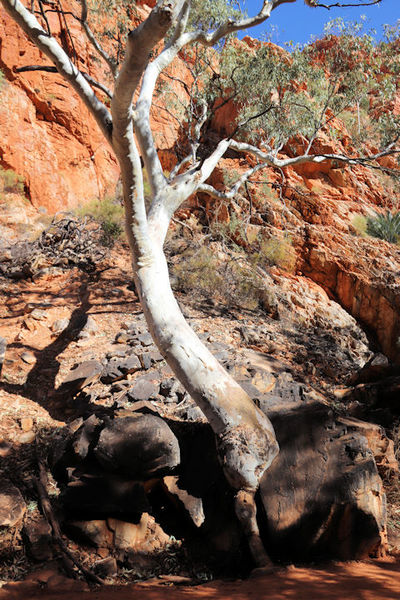 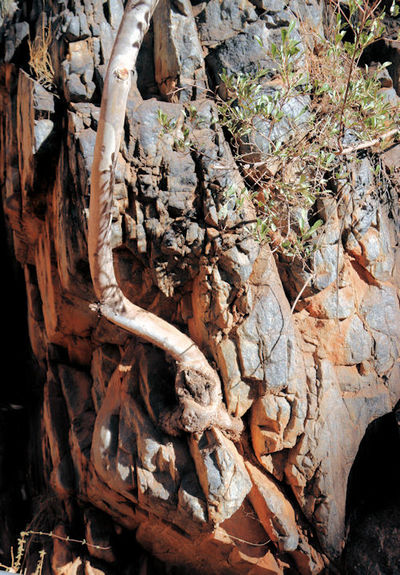