​Sydney was located where it was because of the Tank Stream, a stream of water that could supply the new settlement with that much needed commodity.  The only visible remains of this stream is Bridge Street which was named by Governor Macquarie in 1810, derived from a small bridge located near the intersection with Pitt Street. The bridge used to cross the Tank Stream in the early days of the colony.  Bridge Street was the site of Sydney's first Government House and was the abode of first Governor of New South Wales, Captain Arthur Phillip. 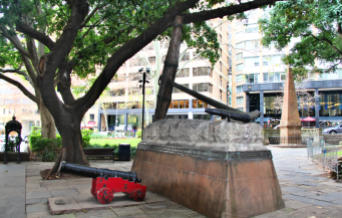 ​Bridge Street is home to some of Sydney’s most significant buildings.
#  The Department of Lands building - a sandstone building  built in 1877-90. ·

# The Department of Education building - is a six-storey, sandstone building built ca. 1912

#  The Chief Secretary's building,  -  dressed sandstone and constructed in ca. 1878.

#  Macquarie Place  - A historic site, situated on the north side of Bridge Street and was originally part of the first Government House. It includes the obelisk constructed in 1818; the bronze statue of Thomas Sutcliffe Mort erected in 1883; and the cannon and anchor from HMS Sirius. 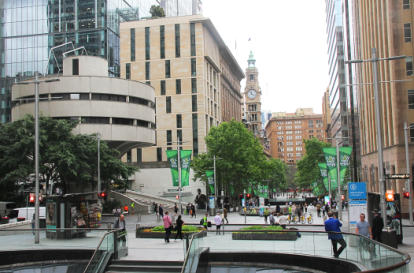 Martin Place - The old GPO clock tower in the background
​​Taking a stroll up George Street and you come to Martin Place and a grand old building that in times before the internet, served a very important purpose.

The General Post Office and its clock tower.  The building has now been repurposed as a hotel and retail.  The original building was constructed in two stages beginning in 1866 and taking 25 years to fully complete.  The Pitt Street facade has sculptures so controversial there was a parliamentary inquiry that looked into removing them, and colonial architect Mr Barnet was stripped of his next commission to create the Art Gallery of NSW.The scandalous sculptures, rough-hewn compared with the elaborate heads on the Martin Place facade, represented working-class men and women wearing ordinary fashions of the day. ''The sculptures weren't seen to be appropriate because they were of working people, not gods and goddesses. They are also quite ill-proportioned, so there was some controversy about that, too,'' said Mr Mould, The then NSW government architect.  Fortunately they survived the disapproving ponderings of Parliament and can still be seen today.

Ever since the proposal in 1863 to construct the Sydney General Post Office on its present site, there had been plans to open up its northern frontage, at that time a narrow laneway that connected to Moore Street past Pitt Street, with occasional proposals for beautifying the area with fountains and gardens. But nothing was done until fire destroyed properties to the north of the lane between Pitt and Castlereagh streets in 1890.A new widened street was created in front of the General Post Office, from George to Pitt streets. It was officially opened in September 1892 and named after the Chief Justice, Sir James Martin, a former New South Wales Attorney-General and Premier. Moore Street (between Pitt and Castlereagh streets) was widened and renamed Martin Place in 1921. Sydney Municipal Council resolved to proceed with a further extension in 1923 but this section required extensive demolition of properties in the way of the line of the street, and it faced concerted opposition from land owners, with legal action taken to prevent the resumption of their land. 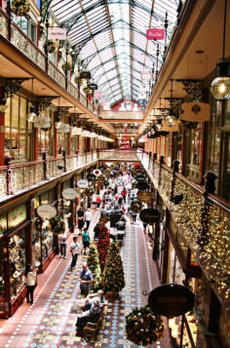 Strand Arcade
Enough of history, time to do some serious shopping.  But what better place that in Sydney’s two old grand buildings.

The ​Strand Arcade, stretching between George Street and Pitt Street, first opened in 1892 and at that time was said to be "The finest public thoroughfare in the Australian colonies".   After more that 125 years, two wars and two major fires the restored shop fronts are an exact replica of the original internal shopping facades.  The Arcade was originally known as the 'City Arcade' and sometimes as 'Arcade Street'. In 1891 it was named after the famous London Street that links the City of London and the City of Westminster. The Strand was London's smartest theatre, hotel and shopping street in the early 1900s.

The one end of the Strand Arcade backs out on to the Pitt Street Mall - a pedestrian mall since the 1990’s and now the most expensive strip, as far as rentals go, in the whole country, and in the top six world wide.  Need some shopping?  Well you have just reached the shoppers Paradise. By now you are feeling overwhelmed, surrounded by regular Aussies going about their business and you have a hankering of getting back to the touristy things to do?  Well you are in luck.

Centrepoint Tower is right there and a high speed lift will take you up to the top for a bird’s eye view of the city.The tower is Sydney's tallest structure and the second tallest observation tower in the Southern Hemisphere, standing 309 m (1,014 ft) above the Sydney CBD and is located on Market Street, between Pitt and Castlereagh Streets. It is accessible from the Pitt Street Mall, Market Street or Castlereagh Street and sits above the Westfield Sydney (formerly Centrepoint) shopping centre. 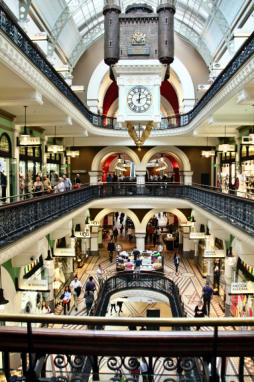 Queen Victoria Building (QVB)
With all of those parcels that you are carryiong, perhaps you want to relax and enjoy a ripe juicy peach?  Well you are perhaps one hundred years too late for our next destination, The Queen Victoria Building known as the QVB.  Completed in 1898, and replacing the original Sydney markets on the site.  Construction took place in difficult times as Sydney was in a severe recession. Many out-of-work craftsmen - stonemasons, plasterers, and stained window artists were used to create the elaborate Romanesque architecture. Originally, a concert hall, coffee shops, offices, showrooms, warehouses and a wide variety of tradespeople, such as tailors, mercers, hairdressers and florists, were accommodated.Pierre Cardin, the French fashion designer, once described the QVB as "the most beautiful shopping centre in the world".  If your credit card is not yet maxed out, the QVB is a second opportunity of buying all those things that you only seem to buy when on holiday.

A feature of the building are Two mechanical clocks, each one featuring dioramas and moving figures from moments in history, can be seen from the adjacent railed walkways. The Royal Clock activates on the hour and displays six scenes of English royalty. The Great Australian Clock, includes scenes from Australian history. An Aboriginal hunter circles the exterior of the clock continuously, representing the never-ending passage of time.On the top level near the dome is displayed a sealed letter to be opened in 2085 by the future Lord Mayor of Sydney and read aloud to the People of Sydney. It was written by Queen Elizabeth II in 1986 and no one else knows what it contains.The Queen Victoria Building was restored between 1984 and 1986 at a cost of over $80 million and now contains mostly upmarket boutiques and "brand-name" shops.Time for a cup of coffee at one of the many coffee shops and restaurants before continuing our journey for some sun in the park where local office workers love to spend their lunch break. 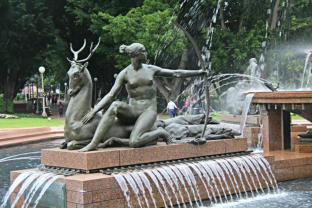 ​The Archibald fountain,  unveiled on 14 March 1932, was so named after the donor who bequeathed the funds with the proviso that it be designed by a French artist.  He wished Sydney to aspire to Parisian civic design and ornamentation.  By todays standards that could well be described as “un-Australian”  François-Léon Sicard, who designed the fountain,  was one of the foremost sculptors of his day, a classically educated artist, whose inspiration was derived, at least in part, from his study of classical Greek and Roman art and literature. 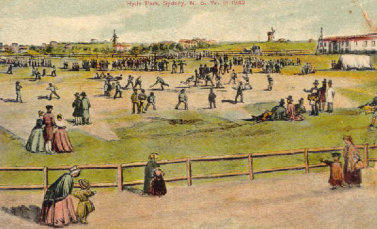 Early post card of Hyde Park
The ANZAC Memorial, completed in 1934, is the main commemorative military monument of Sydney.  (ANZAC = Australian and New Zealand Army Corps.) was completed two years after the Archibald Fountain.  It was built as a memorial to the Australian Imperial Force of World War I.

Hyde Park could be called ‘first park’.  The new colony enjoyed the first horse race, first cricket match, first boxing match and the first rugby match somewhere on the common that is now Hyde Park.On October 13, 1810, Governor Macquarie separated the area from the Domain to the north, named it Hyde Park (after Hyde Park in London) and dedicated it for the "recreation and amusement of the inhabitants of the town and a field of exercises for the troops". He kept the Domain for his own exclusive use.The park is pock marked with drain lids, many of which lead down to Busby's Bore, built using convict labour.  The park is where the gentry of the day took their air.In 1856, Hyde Park was turned into public gardens and sporting activity all but ceased. Cricket and football clubs had to find other places to play. 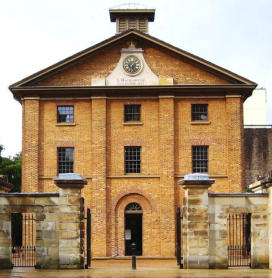 The Hyde Park Barracks Museum (open daily) is a brick building and compound designed by convict architect Francis Greenway between 1818 and 1819; originally built at the head of Macquarie Street (1819) to house convict men and boys.The site is inscribed on the UNESCO World Heritage List as one of 11 pre-eminent Australian Convict Sites as amongst "the best surviving examples of large-scale convict transportation and the colonial expansion of European powers through the presence and labour of convicts." The building has had many occupants since then. It was an Immigration Depot for single female immigrants seeking work as domestic servants and awaiting family and also a female asylum.  More recently law courts and government offices were based at the Barracks. In 1991, Hyde Park Barracks underwent conservation and adaptation work and now the Hyde Park Barracks is a museum operated by the Historic Houses Trust of New South Wales. Tourists who visit the building discover the daily lives of convicts and other occupants through exhibitions on Sydney’s male convict labour force, Australia’s convict system, an innovative soundscape, excavated artefacts, exposed layers of building fabric and the complex’s rooms and spaces. 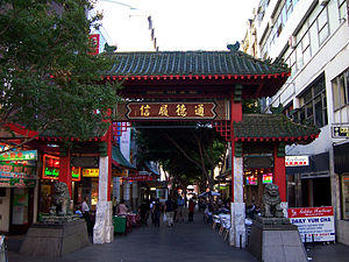 China Town Friendship Arch
The next stop on our walkabout tour of Sydney is the nearby St Mary’s Cathedral.  Facing Hyde Park, St. Mary's Cathedral (1868-82) is a symbol of the spiritual beginnings of the Catholic Church in Australia.  Topped by twin spires, the building was modeled on Lincoln Cathedral, and its imposing façade reflects the design of Notre-Dame in Paris. Inside the cathedral, intricate stained glass windows cast beautiful patterns of light. Christmas is an especially evocative time to visit, when the cathedral is adorned with lights and decorations.

​Few countries it the world can be as multi-cultural as Australia, so why not pop down to Chinatown for a sundowner or to pick up a few extra souvenirs at Paddy’s Market?  Both are in the Haymarket district.  Paddy’s is open on Wednesdays to Sundays from 10:00 to 18:00 but some stalls are not open on week days.
Proudly powered by Weebly