The Statues of Sydney
See also:-
​Botannic Gardens Statues;    Sydney CBD and Suburbs Statues;    Centennial Park Statues
Fountains;     ​CabbageTree Bay - Manly
Throughout history, statues have been associated with cult images in many religious traditions, from Ancient Egypt, Ancient Greece, and Ancient Rome to the present. ... The oldest statue of a deity in Rome was the bronze statue of Ceres in 485 BC. The oldest statue in Rome is now the statue of Diana on the Aventine.
The statues around Sydney are obviously of a more recent vintage.

Every block of stone has a statue inside it and it is the task of the sculptor to discover it. Michelangelo 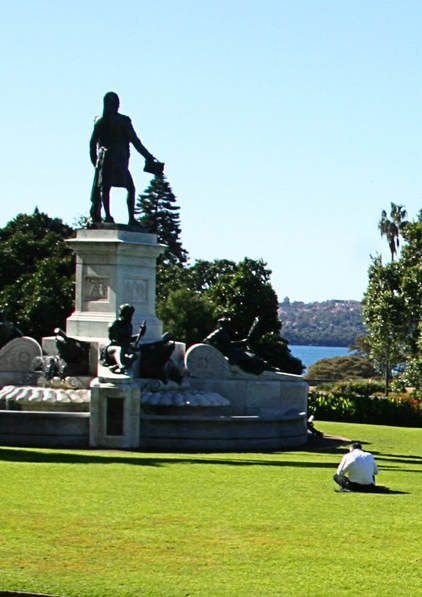 Arthur Phillip was born in Fulham, England in 1738, the son of Jacob Phillip, a German, Frankfort-born language teacher, and his English wife, Elizabeth Breach

In October 1786, Phillip was appointed captain of HMS Sirius and named Governor-designate of New South Wales, the proposed British penal colony on the east coast of Australia, by Lord Sydney, the Home Secretary.    The First Fleet, of 11 ships, set sail on 13 May 1787. Phillip had said before leaving England: "In a new country there will be no slavery and hence no slaves," and he meant what he said. Nevertheless, .

​The Governor's main problem was with his own military officers, who wanted large grants of land, which Phillip had not been authorised to grant. The officers were expected to grow food, but they considered this beneath them. As a result scurvy broke out, and in October 1788 Phillip had to send Sirius to Cape Town for supplies, and strict rationing was introduced, with thefts of food punished by hanging.