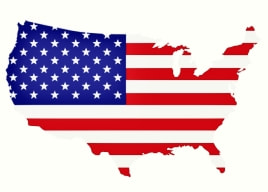 The United States of America is the fattest country in the world, with 33% of the population being obese and 66% considered to be overweight. Foodies may also find it fascinating that Subway recently passed McDonalds as the world’s largest restaurant chain.

​Plenty food to grab by the hungry tourist
Hang on to your burger while you negotiate the following 20 questions.
​
Did you know:-  The Liberty Bell was last rung on George Washington’s Birthday in 1846. It received its fatal crack a few hours later.
Did you know:-  There are over 180 places in the U.S. that have the word “Christmas” in their names. They range from towns such as Christmas, Ariz., and Christmas Valley, Ore., to islands like Christmas Island in Florida and even some lakes (such as Christmas Lake in Washington).
Did you know:-  Chicago is the birthplace of the first ever ferris wheel, which was 264-feet tall and debuted in the 1893 World’s Fair and was demolished shortly after in 1906. Today the 150-foot tall (15 story high) one at Navy Pier is modeled after the original one.
​
Did you know?:-  Atlantic City is home to longest boardwalk in the world and it’s often considered to be the best. It was America’s first boardwalk, built in 1870 to limit the amount of sand that beach-goers tracked into the train and hotel lobbies.   In 1889 it was nearly double this size at 7-miles long, but was destroyed by a storm

​
Did you know?:-  The Pentagon is the largest office building in the world by area, with 17 miles of corridors. The US Capitol could fit into just one of the buildings five sides. It actually has twice the space as the Empire State Building. It was built in Arlington, Virginia in 1943 at a cost of $83 million

​
Did you know?:-  Alaska has a longer coastline than all of the other 49 U.S. states put together.