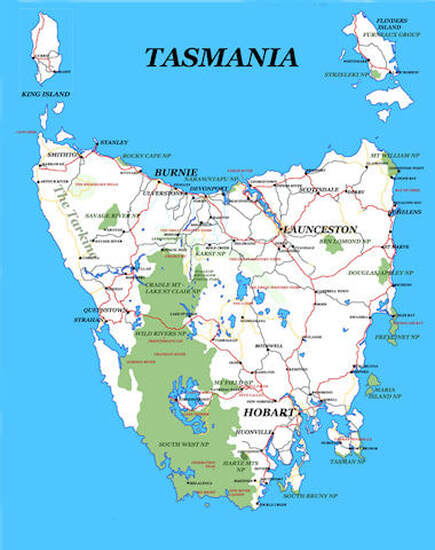 This page is not intended as a travelogue.  My intention is to highlight the attractions with family appeal and to leave the reader to decide on their itinerary and then to join the dots.

Having said that, I am a big kid at heart and the Tassie travelogue, featured on this site, only needs minor tweaking to be repeated here.  Tassie is a good place to visit with kids as distances are not too far and there is lots to see and do.

Driving from Launceston in the north to Hobart in the south should take you little over 2.5 hours - not much longer than from Sydney's north to the city southern border.  Double this if you wish to drive via the east coast to take in Bicheno and Port Arthur.

I you also want to take in the west coast, you are in for some serious driving - about 14 hours to circumnavigate the island.
Launceston and environs
Launceston is the second largest city in Tasmania and one of the oldest cities in Australia having been settled by Europeans in 1806.  Like so many places in Australia, Launceston was named after a place in the UK - Launceston, Cornwall.  It is situated at the junction of the North Esk and South Esk Rivers where they join to become the Tamar River.  (The Tamar river is also a river that separates Devon from Cornwall in the South West of England).

​Penny Royal.  Right near the gorge, in Bridge Road, is the Penny Royal, a fun park wit boat rides, gold panning and outdoor rock climbing.  The park is not big, nor is it very cheap, but the kids will have a ball.
www.pennyroyallaunceston.com.au
Evandale Sunday Market.  If visiting markets is your ‘thing’, then don’t miss out on the Evandale Sunday market, a 30 minute drive south from Launceston.  Here you can buy food, pony rides, hand made items as well as items that grandmother threw out fifty year ago - at five times the price that grandfather paid for them new.  Not quite up to the standard of the Salamanca Market in Hobart, but still well worth a visit, and parking is not a problem.
George Town.  On the opposite side of the Tamar river is the old town of George Town, Australia's third oldest town after Sydney and Hobart, and this town has a long maritime history.  Fortunately there is no need to travel back to Hobart to make the river crossing as the Batman Bridge, opened in 1986, provides a convenient crossing.  We did both sides - Beauty Point and George Town - on the same day.

The Watch House at George Town is the historic old gaol site and features a range of display's conveying the regions rich history. The present building was built in 1843 and was reopened in 2004 as part of George Town's Bicentenary of European settlement.

​Also nearby is Low Head Coastal Reserve, a popular spot to watch the world's smallest penguins waddle in from the sea each night. 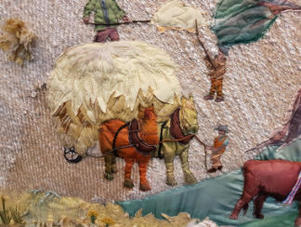 If you find yourself near ​Deloraine (about 60km out of Launceston) on your way to, or from, Cradle Mountain then it is well worth a stop at the Yarns exhibition at the art gallery and museum.  This was a community project with over 300 contributors depicting the life cycle of the local area.  Truly exquisite.
http://www.yarnsartworkinsilk.com/ 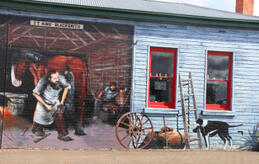 Sheffield
​
In the same area is the little town of Sheffield, Tasmania’s town of Murals.  The first mural was painted in 1986 and there are now over 60.  A great attraction for the town, and their coffee shops.
While in the area a visit to Elizabeth Town and the Christmas Hill Raspberry Farm for a meal would also get a tick of approval.  Enjoy a burger, sundae  or a 'happy platter'.  The kind of place where I would love to start at the top of the menu and work my way through it.

Right nearby is the the Ashgrove Tasmanian Farm. with their shop stocking a selection of gourmet deli and dairy products.  When driving to Cradle Mountain for a day outing, we usually stop at Rasperry farm for breakfast on the way out from Launceston and at Ashgrove for a coffee, or ice cream on the return journey.
Going east from Launceston
Bicheno area is noted for good sea food as well as little fairy penguins. Bicheno Penguin Tours takes you to see fairy penguins at dusk on Tasmania's East Coast.  The evening tours offer a rare and thrilling chance to visit a private rookery.

Bichino also hosts a motor cycle museum, a blow hole and the Douglas-Apsley National Park. The national park car park is literally a 10 minute drive from the township and the waterhole is 10 minute walk from the car park.
https://www.discovertasmania.com.au/tour/bichenopenguintours
http://think-tasmania.com/douglas-apsley-national-park/
Tasmania East Coast

This part of Tasmania is home to Wineglass Bay, one of the best known tourist attractions as well as a number of penguin colonies.

Wineglass bay involves a round trip hike of about two hours to the look out. Last time I did this I joked that there was nowhere for the rescue chopper to land to pick me up - I had just recovered from a medical event.

There are also cruises that take you right into the bay without any  physical effort.

This corner of the world is also known as ‘Sea Food Central’ - although that would be more of interest to the adults.

Port Arthur and the Convict memorial is a memorial to the lack of compassion of our forebears.  Where the convicts suffered only to have their stories glorified by the tour guides. Visit Point Puer boys prison where kids as young as 9 were held.  This may make the 'little ones' behave for at least the next ten minutes.
​If all this history is getting you down, drive a little further towards Hobart and stop at Richmond where you can enjoy some fantastic ice cream as well as look at some more history

Hobart is synonymous with the Salamance Market, the MONA gallery and the end point of the Sydney to Hobart yacht race.  The market is a ‘must’ if you are there on a Saturday.  MONA is worth a visit even if it is just to see what the fuss is about but if the weather is good, take the opportunity of driving up to the top of Mount Wellington, but don't forget to take a warm jacket.

Battery Point, a good place for a walking tour, is full of old houses,  and winding streets.If you are into beer, Hobart is home to the Cascade Brewery since 1824 and they have regular tours.  James Boag, since 1881, have tours in their home city of Launceston.  This must say something about the quality of the water.   If you are not into drinking beer nor local wine, can I interest you in a whisky?  Tasmanians make a good whiskey, or is that whisky?

Back to Travelogue Home Page
Proudly powered by Weebly